Talking Kitty Cat 69 - Sylvester Goes to Court
Steve Cash (November 14, 1979 - April 16, 2020), also known as SteveCash83, was one of the two main protagonists of his popular sketch comedy series called Talking Kitty Cat, alongside his talking cat, Sylvester. Steve loved to hang out in the kitchen talking to Gibson and Shelby, indirectly bothering Sylvester.

Steven Carl Cash was born on November 14, 1979 in Oakland, California, later graduating high school and pursuing his dream of becoming a musician. Steve moved to Boise, Idaho soon after. Steve was the owner of his channel and has been seen and heard in every episode he has made over the years. Steve had lots of other shows on his channel aside from Talking Kitty, with the most popular being 4Steves. Steve had no common enemies and his favourite foods were McDonald's Hamburgers and Hot Pockets. Steve Cash also had a nemesis named Todd, who previously kept Sylvester as his own pet and named him Rufus.

Sylvester was Steve's first animal. His second animal was a Ragdoll cat named "Ibanez". Ibanez lived with Steve for 2 months before disappearing in December of 2008. Steve's third animal was a dog named Shelby. Steve's fourth animal was a Linx Point Ragdoll named "Gibson". He found Gibson on a craigslist ad while searching through the internet. Steve then did not have any more pets for 3-4 years before a 4th cat showed up in his Meridian residence yard. Random Kitty was found in Steve's backyard with no history and no owner. Steve decided to take the cat in and has had it ever since. Steve's 5th animal, Gibbyson, was from a litre of 5 kittens. Gibbyson was chosen by Random Kitty as the one she wanted to keep. At this time, Gibson sadly passed away. Steve's then 6th cat, GG, made its debut in Good News & Bad News.

Alongside his animals, Steve loved music and playing his guitar. Steve was in a band called 'Pause For The Cause', and he was known to be an extremely talented and accomplished artist and musician. Steve had also written many songs on his own, and like Sylvester, also had an ear for music--an ability that only a few people are blessed with.

Steve was married to Celia DeCosta Cash, whom he met back in 2009, for 2 years up until his untimely passing due to suicide in April 2020. The couple also had 7 kids together.

According to some sources, Steve was a Christian (Mormon).

On April 16, 2020, Nampa Police Department responded to a call at 7:31 AM to Cash’s house, Steve Cash had died from a self-inflicted gunshot wound to the chest, and the manner of death was ruled as suicide.

"This is so hard. I'm not even sure what to say, or for that matter, what to do. I just lost my best friend, my sidekick, my lover, my mentor, my absolute everything, this morning. I'm so sad to say, my husband, Steve Cash took his own life this morning 4/16/2020. It hurts me to share this. Please understand, give the family time to grieve, but know that Steve is no longer in pain." - Celia DeCosta Cash

Steve's final Talking Kitty Cat video was posted on December 30, 2019, titled Sylvester Goes To Court. It was the 69th episode in the Talking Kitty series. After Steve's death, many people went to the comment sections of Steve's videos, especially the final one, to pay their tributes.

Steve suffered from bipolar disorder, and he was very open about it, especially mentioning it in the final Talking Kitty episode. 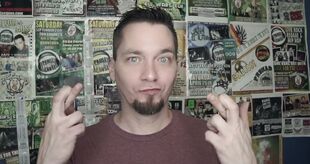 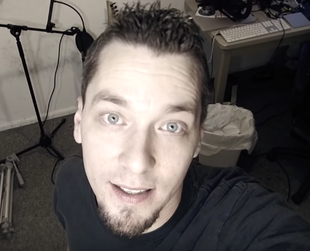 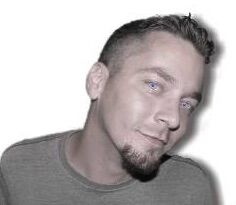 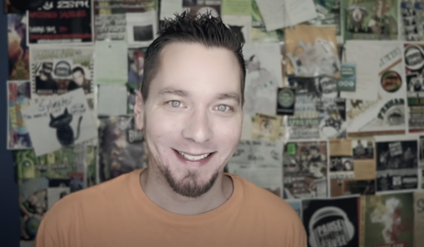 Steve smiling at the camera.

Steve smiling at the camera. 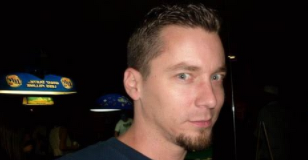 Steve is surprised when a fan takes o photo of him.

Steve talks to the camera. 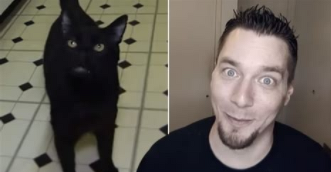 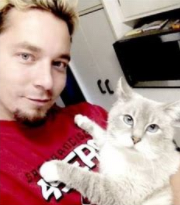 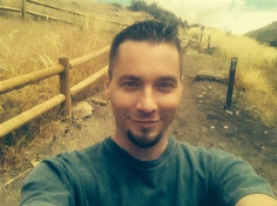 Steve on an old road. 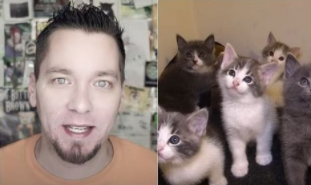 Steve and the Random Gibsons. 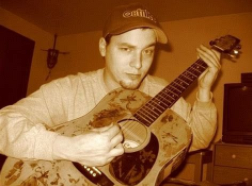 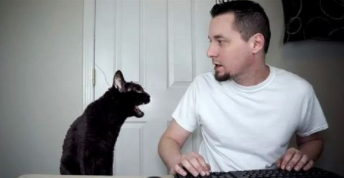 Steve applying Sylvester for a job. 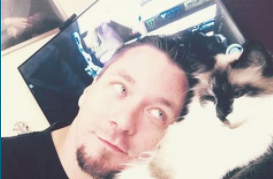